Restoration project for the city of Gdańsk 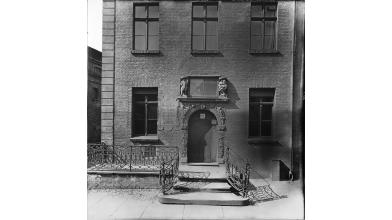 We are proud to let you know that Regts - Delft Tiles has been awarded a new project in the city of Gdańsk, Poland, which involves the restoration of a late 17th/early 18th century tenement house. One of the few original houses that survived the war. The project was assigned to us by the municipality of Gdańsk (GIWK).

The house still had many details of the rich late 18th century interior, although it was in a very poor condition. A part of the interior used to be covered by most likely thousands of Delft tiles. During the 18th century, Delft tiles often played an important role in the interiors of Polish houses like this one. Although most of the tiles have been stolen, some were still found during the current renovation of the house. To compliment the completion of the project, the municipality of Gdańsk decided that the most prominent wall has to honor the many Delft tiles that used to be in place. The wall will therefore be covered with more than 1000 antique Delft tiles. It will make it a one of a kind entrance in a beautiful combination of 18th century Polish and Dutch design.

We are a family firm specialized in Delft tiles. Our stock covers the entire production period, which started around 1570 and ended just after 1900. If you are interested in working with us, please always feel free to get in touch.About usContact us